2015 marks 100 years of swimwear and to celebrate a new London exhibition in honour of the fabulous fashion, Planetfem is rolling back the clock to bring you a taste of swimwear styles from each era. Starting with the bathing beauties from the end of the Victorian age to early Edwardian era – 1900 to 1920.

Before 1900, men swam naked in the sea without having to worry about causing women fainting attacks with their bare prowess – beaches were segregated so we were spared the bother! Women, on the other hand, insisted on maintaining their modesty, even out of sight of the men (or did the men insist?) Billowing skirts were fashionable and their bathing attire was pretty much designed in the same way as their day dresses. Think swathes of woollen woven material called serge made into voluminous bathing dresses. Ridiculously dangerous for swimming as the material would become really heavy when wet, dragging them underneath the water. 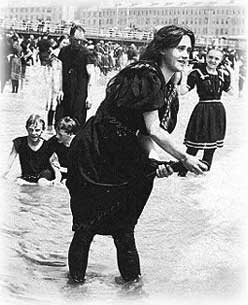 Dr Christine Boydell, the curator for the Riviera Style exhibition at the Fashion and Textile Design Museum in London explains, “They were designed for bathing and that meant taking the waters for health reasons and being plunged into the sea. People believed in the health benefits of sea water,”

“You’d come out and get changed into your day clothes, and often that happened in a beach hut or a beach carriage that was wheeled into the sea.”

By 1910, specific beachwear designs came into fashion and were made using a knitted (though more lightweight than serge) cotton stockinette. Unfortunately, this material turned transparent when wet so swimsuits were made in dark colours so as to preserve the wearer’s modesty.